Get the Facts about Gypsy Moths

Home • Get the Facts about Gypsy Moths 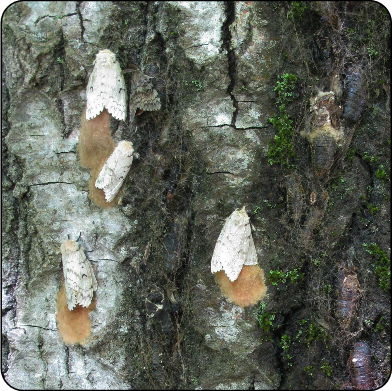 Gypsy moth infestations are handled with an Integrated Pest Management (IPM) approach. This means we are using different management techniques to address the pest population, starting with the least harmful to the environment.

Where did Gypsy Moths come from?

Gypsy moths are invasive species brought to North America from Europe. They were first detected in Ontario in 1969, and widespread defoliation occurred in 1981. Infestations are cyclical, with outbreaks generally occurring every 7-10 years. The most recent outbreak in 2008 was much less severe than previous outbreaks recorded in 1985, 1991 and 2002.

Do they have any natural predators in Canada?

The gypsy moth has many natural predators in Canada. Other insects target gypsy moths in various stages of their lifespan, including wasps, flies, beetles, ants, spiders and even birds. In the egg form, parasitic wasps target the gypsy moth eggs and can generally be found anywhere gypsy moth infestations occur.

Where do Gypsy Moths occur?

Gypsy moths can take home in a variety of tree types. Infestations mainly occur in hardwood trees, such as oak, maple, elm, birch and poplar trees. However, as the number of gypsy moths increases, they can begin to consume coniferous trees, like pine and spruce trees. Typically, the conditions where the infestation occurs are high and dry ridges.

How much can Gypsy Moths eat?

What can I do as a Homeowner to manage Gypsy Moth infestations?

The most common method of removing gypsy moth nests is handpicking. Shake a tree to disturb a nest and identify where caterpillars are in the tree. Always use gloves! Remove egg masses from nests and place them in a bucket of soapy water. Let the eggs sit in the soapy water for a few days before discarding them.

Residents can also place a burlap band/wrap around the base of the trunk. This wrap captures caterpillars and female moths as they like to gather during the day in the burlap. Make sure the top of the burlap can hang over a bit to create a pocket. Check the burlap every afternoon and collect all captured caterpillars and place them in soapy water.

Residents may consider placing pheromone traps on their property. These traps attract male gypsy moths, which prevent them from mating. Once captured, place in soapy water before discarding.

Other tips and tricks that residents can consider are to attract natural predators to gypsy moths by planting native trees, shrubs and flowers to attract them. Make sure to always keep the trees on your property healthy by watering them and placing mulch around them during drought periods to retain water and prevent dry soil.